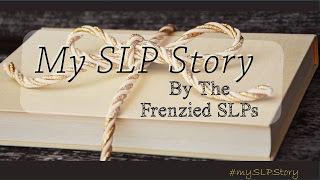 Anthropology,
English, Liberal Studies – OH MY!  Those were three of the FOUR different majors I declared by the time I was a junior in
college, September 1979. By the junior year, we were supposed to know what we
wanted to do. Ugh. Not me. I know I sound scattered-brained, but I had NO IDEA what to do. I
loved Zoology, Botany and thought about taking a course in Genetics as well.
Maybe I would become a geneticist. And then I became completely fascinated with
the idea of majoring in Library Science and that was BEFORE technology took
off! Wait, wait, wait–I forgot about my Latin course! Loved it and the
professor was wonderful. Maybe I needed to major in a foreign language (already
had six years of Spanish under my belt taken 7th
through 12th grades). Yep, I was a hot mess when it
came right down to making this decision. So, what did I do that first semester of
the junior year? Why, I signed up for many different courses – including a
second year of Latin and two classes from the department of Speech Pathology
and Audiology at California State University, Sacramento.
Then
IT happened. The first two weeks of those two SLP courses changed my direction in
life FOREVER. Why on Earth did I make a life-altering decision in less than two
weeks? Reason 1) The first SLP course was Language Development, taught by
professor Dr. Colette Coleman. We’re talking sentence diagrams, language sampling, developmental
charts, etc. Loved the topics and loved the professor. Reason 2) The second SLP
course was Phonetics, taught by Dr. Morris Val Jones. I was completely
enthralled learning the IPA, linguistics and transcription. Hmmm…this field sounded intriguing, so I asked some questions and did a little research. Later courses would involve a lot of anatomy and physiology, more on language development, and lots of other cool-sounding stuff. Yep, this was IT!!! I
dumped everything else and jumped into Speech-Language Pathology. Yes,
I knew it would be four years and two degrees, but that was totally fine.
Little
did I know that of the sixty (60) SLP students who started that semester, only
nine (9) of us would walk across the stage at CSUS to accept our Master’s
degrees. Dr. Mary Jane Rees warned all of us as juniors that very few would
finish the program. I couldn’t believe what she was telling us, but remember
resolving on the spot that I would be one of those who would finish. Don’t ever
tell me I can’t do something!
Cool
coincidence…. Remember those first two professors I mentioned? They became the
first and second readers for my Master’s thesis. Let me tell you writing a
thesis is a LOT of work, but there is no better way to become an proficient at
deciphering research articles than to conduct your own study! 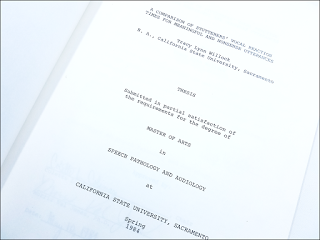 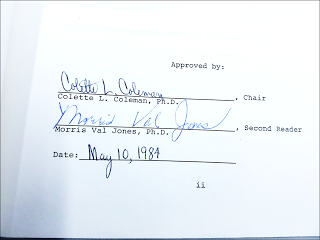 Looking back, the only regret I have is dropping the second year course in Latin. A few years ago, I found my former Latin professor online and emailed him telling him how much I enjoyed the first year and that I sincerely regretted not taking the second year.
32 years, dozens of schools, hundreds of students and patients later, I’m still happy I made this career choice. While I do think big changes need to happen in the public school setting, I still love being a part of changing student’s lives and helping patients in the acute setting. I wouldn’t trade it for the world!
What’s your SLP story?