It’s our nemesis!  You know what I’m talking about. That R-especially the post-vocalic or final R sound can be SO difficult to elicit. I have a trick for you that will help your students GET that post-vocalic R.

Often, a student can get a good production of the R when it occurs at the beginning of a word as in rock, rat, or ring. However, making a great R sound when the R follows a vowel is often a HUGE challenge. One approach I learned early on is to use co-articulated phrases to help with eliciting a good final R sound.

What do I mean by “co-articulated R phrases?” A co-articulated R phrase is two words said together where the first words ends in an R and the second word begins with an R. Here is an example: “Taylor runs.” Yes, I picked a doozy because this contains the difficult OR combination. Oh, and there is an L, too which further complicates the situation! When a student is able to say the initial R in the word “runs” correctly, you can make use of that correct production to get the final R.

First, tell your student(s) they will be saying words a little differently than they are used to saying them.

Now ask them to exaggerate the R in runs as in “Taylorrr runs.”

Next, tell them to run the two words together as though it is one word “Taylorrrruns.”

Practice this a few times.

Now ask them to start the phrase….but leave off “uns.”

Alternatively, you ask them to pretend they are going to say “runs” but stop before they actually finish that word. This is my favorite way to approach it!

You might have to jump in and cue them when to stop.

Your student may need to put an “uh” at the end of the phrase to get the R as in “Taylorruh.” That’s OK because you can fade the “uh” later.

If your student doesn’t get it at first, keep practicing. Remember, normally there is space between words. Now we are telling them to eliminate that space!  Adjusting to that concept takes practice.

Keep at it and let me know how it works for your students!

If you need materials for this approach, I have an inexpensive product for you to try. It’s my Rock ‘n’ Roll Articulation for Co-Articulated Phrases. You can use these as whole sheets or cut each sheet apart into individual cards. There’s an all black ink version, too. Click the picture below to view it. Super easy and super fun. 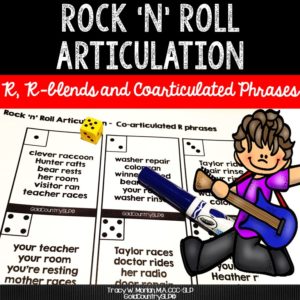 Have a GREAT week!