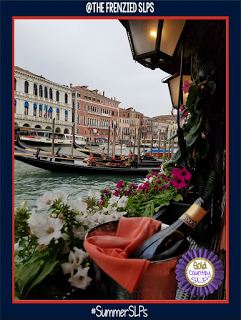 Europe 2016
Ten years of saving airline miles-that is
what it took to get my family of four to Europe this summer. It meant a lot of
staycations over the past several years, but was totally worth in the end. We
started in Italy-Pompeii/Naples, Rome, Florence, Venice (photo) and Lake Como. Then
it was on to Switzerland-Zermatt, Lauterbrunnen and Gimmelwald. As
if that was not enough we then ventured to Germany-Fussen, Rothenburg ob der
Tauber and then came home from Frankfurt. Whew! Now I need a vacation from
vacation!
Since I am an SLP, I could not help but
think about language and communication a LOT while visiting Europe. None of us
speak the languages spoken in these countries. While many people there speak
some English, many do NOT speak English. We found ourselves in two situations where it was VERY clear that the spoken word is not the
most important piece of communication. I’ll share those two happenings below.
1) Venice. Beautiful. Amazing. Terrible
place if you need a functional ATM machine, however. We were out of cash. Note:
This is usually NOT a problem in Europe. In Venice, there were two ATMs
compatible with our American bank. The first one was undergoing renovation and was not open. We found the second one. My card would not work, despite several
attempts. My son put in his debit card. We waited. And waited. Nothing
happened. I mean NOTHING happened. His card was still in the machine and no options were
available. Suddenly, a message appeared on the screen that we translated to
mean the process took too long and therefore his card was being confiscated.
Whaaaat?! The machine ATE his card? First thing
he tells me is not to freak out. Yeah, he knows me well, but let’s just say
that while I would not describe myself as one who panics, I am definitely one
to take action. Immediate action. There
were two people in uniforms outside the bank that looked like they were there
to retrieve money. They spoke NO English. We speak NO Italian. However, I
managed to convey the situation using gestures, facial expressions, etc. They
made it clear that they could not help. However, a few minutes later, two bank officials appeared one of whom spoke English and my son was able to get his card back. Thank goodness. I’ll concede that I probably appeared to be a bit panicked based on my tone of voice, body language and facial
expressions. Reflecting on this later, I thought about how our words are such a
small part of communicating!
2) An ATM issue-again! This time we
were in Interlaken, Germany. We located an ATM in this small town, but it was
not visible from outside the mini-mart store. Of course, I was elected to go
inside and get it figured out. The mini-mart looked just like one you would
find in the US! Located the staff person. She spoke NO English. I speak NO
German. Her ATM was actually a credit card reader, but I managed to get some
cash and decided I would deal with any prospective charges later. She was so
nice! I felt that she went out of her way to help me. Our communication involved gestures, facial expressions and body
language ONLY. Communicative intent was successful. I thanked her profusely (in
German-thank you is one thing I can say in German!). I think she enjoyed the
interaction as much as I did!
Moral: SO much of our communication is
NON verbal. Yes, those of us who work in the communication disorders field know
this, but when you find yourself experiencing it first-hand, it is a real
eye-opener!!!!
Hope you are having a wonderful summer!

PS: The photo is in Venice in front of the Caffe Saraceno, near the Rialto Bridge. Don’t believe the negative reviews you read about it.

Error: An access token is required to request this resource.
Type: OAuthException