Working with older students? Often students with language difficulties or a history of language difficulties struggle when it comes to creating complex sentences. These are the students who often score poorly on the Formulated Sentences and/or Sentence Assembly tests from the CELF-5 (and earlier versions of the CELF). They may also have difficulty with the Sentence Repetition test. If you look at those test results, you will likely find that the items calling for use of connector words are problematic.

Subordinate clause: part of a sentence that contains a conjunction (connector word), that is dependent on the main clause. Examples: “She answered the phone when it rang.” In this sentence, “when” is the conjunction or connector word and “when it rang” is the subordinate clause because that part of the sentence cannot stand on its own. If used alone, it is a sentence fragment. I hear language-impaired students do this frequently! What should you do? Say their sentence fragment back to them and ask them if it makes sense. They usually understand that it does not make sense.

Here are some more examples of subordinate clauses: After soccer practice, we went home. Can you tell which part is the subordinate clause? Or maybe I should ask you which part of this sentence can stand alone? The answer is: “We went home.” The subordinate or dependent part of the sentence is “After soccer practice.” This part can’t stand alone. It is dependent on the rest of the sentence to make sense. “After” is the connector word or conjunction in this sentence.

Let’s look at another example of an insubordinate or independent clause and ways to combine those into a more complex sentence.  “He walked slowly.” “He was late for school.” You may have to stretch your students’ thinking a bit to get them to combine these two separate, complete thoughts into one sentence: “He was late for school because he walked slowly.” Again, these are two thoughts combined with a connector or conjunction word. This is often where you will lose them unless you have visuals to help you teach this complex concept.

How to Help with Creating Complex Sentences

The key is to have a set of “connector” words that essentially force the creation of clauses. Examples of connector words: and, but, although, when, if, after, before. Those of you familiar with the CELF-5 will recognize these! What do I mean by forcing the creation of a clause?

Give your student the following words written out on index cards: eat, snack, homework. Now add the word before. Ask the student to make up a sentence using these words. They can include other words as needed. The cards can be arranged in any order, but the sentence must make sense. Words may be added to form a complete sentence. Example: “I eat a snack before I do my homework.”

Once they create one sentence, have them use the same words in a different order to create the second sentence: “Before I do my homework, I eat a snack.” If they struggle, instruct them: “Now I want you to use the same words only this time begin your sentence with the word before.” You might have to re-arrange the words for them before they see that there is another way to construct a sentence. Have the student manipulate the cards so they can get used to re-arranging the words.

Transfer this task to written language by having your student WRITE OUT the sentence. This is a skill that will take appropriate materials and a LOT of practice for our language-impaired kids, but I have a set of materials to make it fun and easier for you, the busy SLP!

I use vocabulary cards to help with creating complex sentences. The cards I use contain several categories of words: nouns, verbs, adjectives, and conjunctions. I give my students instructions about how to combine the words to create subordinate and insubordinate clauses.

Do you need materials for this method? I have it covered. Here is a link to my sets of Complex Sentence Builder card sets. These packets contain 160 cards of THEMATIC words grouped in several categories: nouns, verbs, adjectives, and conjunctions. There are task cards giving instructions about how to combine the words to create subordinate and insubordinate clauses. The sets also contain pronouns, wh-question words, articles, and determiners so complete sentences may be formed. 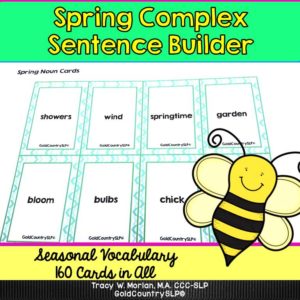 Have fun working on this skill!